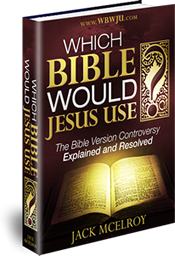 Which Bible Would Jesus Use? The Bible Version Controversy Explained and Resolved

Are you tired of the smirks and childish questions of King James Bible detractors?

Are you sick of hearing the same old insincere questions like, “Tell me, which edition of the KJV is the Bible?” or “Where was the Bible before 1611?”

You’ll find the best answers to these questions and more in Which Bible Would Jesus Use?

Now you can go on the offensive by asking them one simple question, “If Jesus came to your church, which Bible would he use?” Making them answer this question along with the knowledge you’ll get from this book will settle the Bible version controversy once and for all.

You’ll learn Why “Which Edition?” is (quite often) a trick question to destroy your faith in a literal book. And the real reason they ask you the fake question in the first place.

You will now be able to prove to anyone why the Lord himself is forced to choose only one Bible and why that Bible is the King James Bible.

They’ll be convinced once they learn…

They’ll stop laughing at your faith in the written words of God when you quickly and easily answer questions like:

This book also walks you through some of the major passages used to challenge creditability of the KJB. Your faith will be strengthened as you learn to explain tough issues like: why the Lord didn’t preserve the original autographs; why inspiration of Scripture doesn’t mean what they say it means; where the Greek text used in modern translations came from; and what doctrines are affected by these variant readings.

“An insightful read into biblical history and our understanding and appreciation of it.”

“…a diligent Christian businessman (Proverbs 22:29) has successfully reduced the rancorous ‘King James Only-ism’ debate to a single, unconventional premise—‘Which Bible would Jesus use?’ The utter simplicity of Brother McElroy’s question will undoubtedly render many in academia apoplectic. And yet, his unique approach is entirely Scriptural.”

“I believe that you have made a significant contribution to Bibliology and that your work will provoke more people to think intelligently about Biblical preservation. I think that you have rightfully presented the fact that all translations are not ‘essentially the same’ and have convincingly argued that textual criticism is not an exact ‘science’ at all … You have presented the right arguments in a clear, concise, thought-provoking way. Thank you!”

“McElroy demonstrates a keen understanding of the importance of branding. His application of the concept to the Bible version controversy is simply brilliant.”

––Raymond Aaron, author of eight books, including Branding Small Business for Dummies, and co-author of the New York Times best-selling Chicken Soup for the Parent’s Soul™

“As an intellectual property attorney, my mission is to protect and defend the integrity of my client’s written text. In like manner, Mr. McElroy does a masterful job of defending the traditional biblical text as it is presented in the King James Version of the Bible. He does so in an informative and engaging way.”